Florencia Urbina: Costa Rican Art Legend
Inspired by the discovery of animal tracks in her outdoor studio, Florencia Urbina Crespo enveloped herself in nature; then transposed it onto her canvases. Waking up to find telltale signs of these nightly visitors, Urbina quickly learned to identify whether her silent guests were anteaters, raccoons, kinkajous, or curious monkeys. Her vibrant images capture her encounters with wildlife, not just from these studio visits, but also from trips to Costa Rica’s national parks, sightings at the beach or sometimes in her own backyard. She still keeps a list of the animals she’s encountered, and shudders when she remembers the venomous snakes coiled up among her painting materials.

“I started to get interested in art around the age of twelve, when my maternal grandmother would take me to art gatherings, and I would sit amongst the intellectuals,” Urbina recalled. “She also taught me a lot of techniques.”

However Florencia was most enchanted by her visits to a magical place in San Jose: an old house owned by her cousin, the painter Guillermo Jimenez, who was a member of Grupo Ocho, a 1960s group of artists. “The place was full of art and antiques. Artists, poets, writers and actors would meet there and talk. They would read poetry and discuss the latest novels they had written, and I was just totally overwhelmed by this beauty and joy,” Florencia said.

Though intrigued by the artists that surrounded her and the process of learning to paint and develop her own style, Florencia’s main passion at that early age was dance. Whether it was ballet, flamenco or modern dance, Florencia was always on the move. It was, she thought, her true calling - until tragedy struck. At 19 years of age, Florencia’s dancing career was cut short due to an accident that prohibited such fluid mobility.

Channeling that energy onto the canvas and transforming light and color into three-dimensional forms became one of Florencia’s hallmarks as an artist. Urbina’s uninhibited style, and use of powerful colors and strong lines – often mistaken for “pop art” – brings a new perspective to what can be more accurately defined as neo-figurative work. While her paintings can sometimes display a whimsical attitude, others convey complexity and acuity, while others contain satirical or ironic political elements. It is this breadth of subject matter that gives great depth to her work.

Having served as director of one of the most important museums in the country, the Museo de Arte Costarricense in San José, she worked with over 500 artists and arranged more than 20 shows, revitalizing the museum and art scene in San José. Florencia also held posts as cultural attaché to the Costa Rican embassy in London, and advisor to the Ministerio de Cultura. She studied art in Costa Rica, the United States and Indonesia. Her works are included in many national and
international collections. Among her numerous awards is the Costa Rican Premio Nacional de Pintura, the country’s most prestigious painting prize..


On December 1st, Florencia brings together a collection of intensely tropical works in “Boom Goes the Tropics,” shown concurrently at the Daniel Oduber Airport in Liberia and 5 km west at the Hidden Garden Art Gallery. 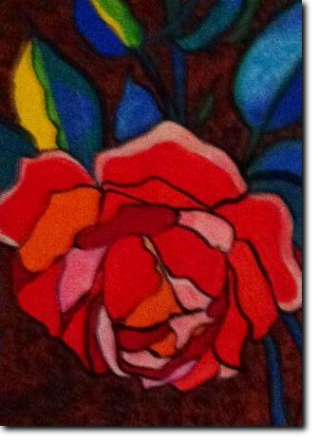